Aging in Ayurveda is associated with the process of degeneration and decay (Kshaya). Ayurveda considers aging Nishpratikriya (natural changes that cannot be resisted).

Ayurvedic texts describe oleation therapy (Snehan karma) as one of the most effective ways to balance Vata in mind and body. 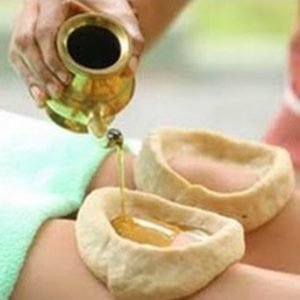 Basti means medicated enema. Basti therapy is considered as best among all the therapeutic measures for balancing of Vata and the management of Vata disorders. Basti is accepted as a complete therapeutic measure by many Ayurveda physicians. It is one among five detoxification processes of Panchakarma.

Why the name? This process is called Bast or Vasti because in ancient times, animal bladder was used to administer it.

Yapana basti (1,2) is a type of enema that has palliative properties. Matra Basti is considered therapeutic and is administered using various medicated oils such as Sukumar Ghrita, Dhanvantari Tail etc. it should be used only on the recommendations of Ayurvedic physicians. Basti with Tikta Dravya Ghrita and Kshira is recommended in Asthi kshaya (3).Tikta Rasa by its Deepana (appetite stimulant)), Paachana (digestive) and Rochana (stomachic) properties (4) increases the Dhatvagni (metabolic stage). With increased Dhatvagni, nutrition of all seven Dhatu is improved and thus it helps in Asthi poshan. Optimal nourishment supports good health and longevity. Tikta Rasa by its Lekhana (scraping) property helps in the weight reduction and thus is helpful in the management of Osteoarthritis (4).

Book a Consultation to learn more

Disclaimer
Connect With Us